A fun unforgettable competition for a dream job I almost got... Maybe next time? Highlighted ProjectsTravel/Lifestyle

I was living in Playa del Carmen, Mexico in November 2017 when an online acquaintance sent me a link through messenger. Turns out Cancun.com was launching a worldwide search for a dream job: they would pay 10,000 usd a month to a candidate who would travel around the Cancun area for 6 months and create content (mainly video) to share this experience with the world. I did feel like I was a very suitable candidate. Not only was I living in the area but I spoke perfect English and Spanish,  had been a video creator for over 10 years and am an experienced and joyful adventurer who enjoys surfing, diving and almost any outdoor activity I have the chance to try out. I also quite enjoy challenges so I set out to creating my 1 minute introduction video knowing that there would be a huge number of competitors out there.

Video 1: Trying to stand out

The request was simple: Introduce yourself in a one minute video and tell Cancun.com why you are the perfect fit. But when you have so much to say, a 1 minute maximum time can feel quite tight. There was a lot to communicate: character, experience, skills, circumstances but I knew that in a competition as big as this one, it was necessary to stand out in the very first 3-5 seconds. I was thinking about how to possibly stand out from the crowds when I had the idea that I was sure would make them not only watch my video until the end, but also remember me: Instead of talking to the camera, I’d sing. The rest was polishing a very to-the-point script (or lyrics actually) and rehearsing the tempo of the song to match the 1 minute mark. I trusted my idea and went for it adding some simple post production details to also showcase some of my skills. 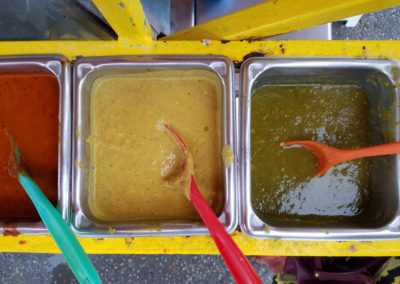 In my 2nd video, I featured both street food and gourmet eating in Playa 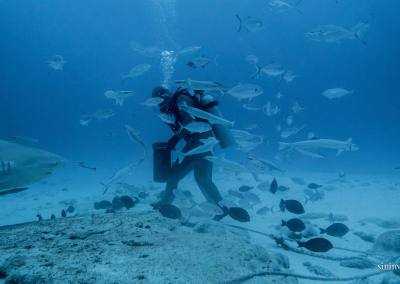 for my 2nd video I went to the last Bullshark feeding of the year. 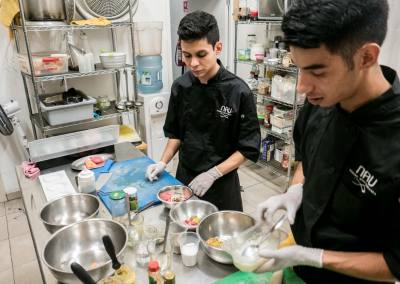 Making it to the TOP 100 of the Cancun.com CEO Search was already quite exciting. Although I trusted my video, I didn’t have high hopes, mainly because there were over 8,000 applicants on round 1 and because in the end this was a job posting where a great video was only one part of being a good fit. For the next round we had to create a video introducing the place where we were, wherever that might be. It just so happened that I was in the very same region the job would be happening. We were given the brief only one week before the deadline. It was New Year’s Eve and Playa del Carmen was beginning to get hectic with the high season. I still wonder how I managed to produce the interview and activities with such a short notice and time before deadline. I showed myself playing again but because I didn’t have time to practice the speech while playing, I decided I would show off some other postproduction skills by placing 2 different Muriels in one frame. I also made sure to include creative use of my drone, my diving skills and underwater gear and clever narrative hooks to go from one activity to the other. I submitted the video feeling I had done a good job and surprised by how fast I had managed to be. Cancun.com would pick the TOP 50 applicants from this Second video, and after that, we would have a week to get online votes from our followers before they chose the TOP 10. This part of the story has a happy ending: I made it into the TOP 50 and went on to ask all my online contacts to support me by voting for me on the site. There was tough competition, by the end of the voting period, the applicant with the most votes had over 60,000.

I got an email asking me to be available for a Skype call with Chad Smith from Cancun.com. The email didn’t quite say it but I felt like there was a big chance I was getting into the top 10 applicants for the dream job. On the call, Chad told me the good news very quickly, and they recorded my reaction, just like they did with all the other top 10 applicants, whom I’d get to meet and spend time with during a week full of challenges in Cancun. As the other top 10 applicants and I were getting ready for our bizarre adventure together, a lot of other participants with greater social media following started posting hating videos online about how lame we all were. I was pleased to see that, although I was the second to last in terms of social media voting among the Top 50, they didn’t complain about me getting in. The whole Cancun week was a hectic and intense adventure that resulted in a few really cool new friendships with international travelers. Most applicants were from the US, there was only one Mexican in a couple that had registered as an American team and a Brazilian in another US registered couple. Greg and Kaitlyn were the only ones from Canada, Meritxell the only one from Europe and I was the only fully Latin American team. As well as a team of 5 from Cancun.com, we were joined by Ben Southall all the way from Australia. Ben was the winner of the first ever Best Job in the world and became the Caretaker of the islands of the Great Barrier Reef in 2009. Our schedule was crazy. We had several social media daily tasks related to the many activities we were taken to as a group. Towards the end of the week, we were each given different activities we had to register and create a video of… overnight! I was one of the few participants challenged to go to 2 different places. In the morning I was sent to Xel-ha, a theme park that’s all about water and in the evening I went to a Pirate show on a boat. This means I was given like 5 or 6 hours less than other participants to work on my edit, mainly overnight. I slept only 2 hours which resulted in a terribly coarse voice for my official interview with the whole Cancun.com team including members in the US, who watched the interview over Skype. It is obvious for me that, given more time, I would have made a much better video; but there are still some aspects of my final attempt to get the dream job that I’m really happy with. Working under such pressure meant I had to fly my drone over Xel-Ha without GPS coverage (first time ever doing so), had to work on batteries not fully charged and completely dismiss my best camera because Xel-Ha needed water proof all along. We also weren’t allowed to bring cameras on to Xel-Ha’s main attraction and only found this out after walking 15 minutes to it. Xel-Ha’s employees didn’t have permission to talk to the cameras which challenged one of the goals we had been given: to bring a human element into the video. On the boat, the staff were amazingly friendly but the light was super low and the sound too loud to make any interviews. I believe the circumstances Tess and I were given were particularly challenging. 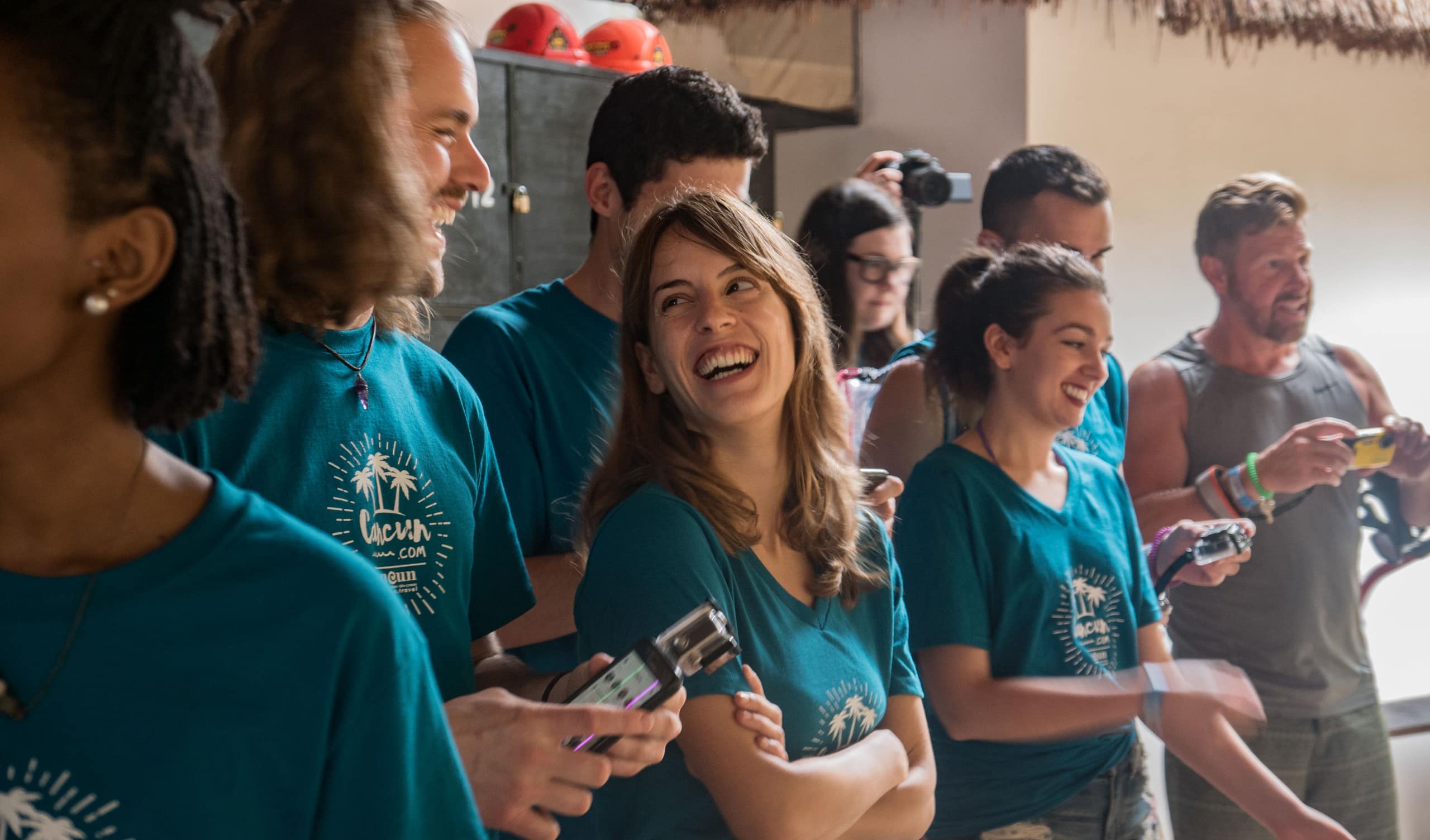 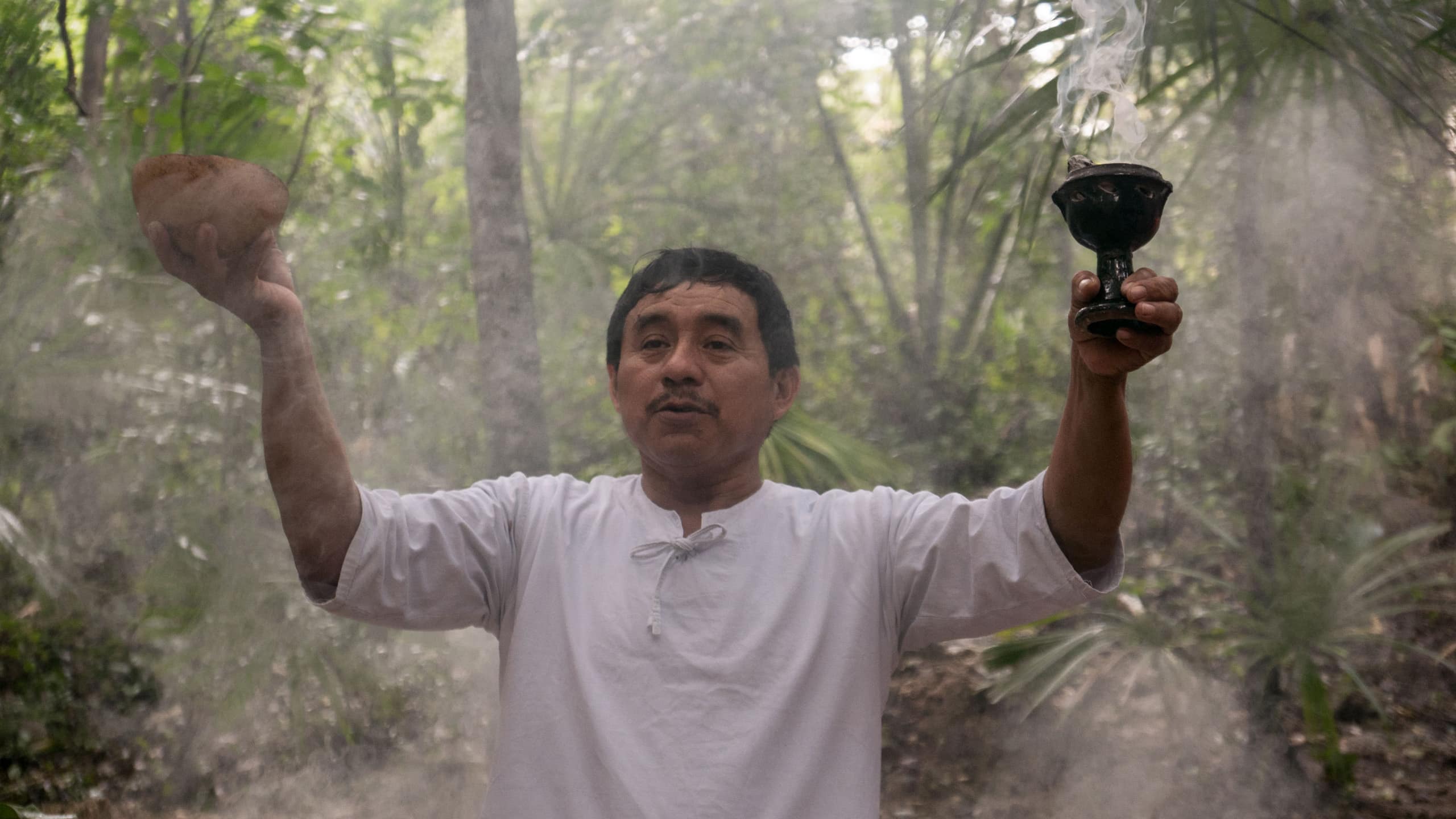 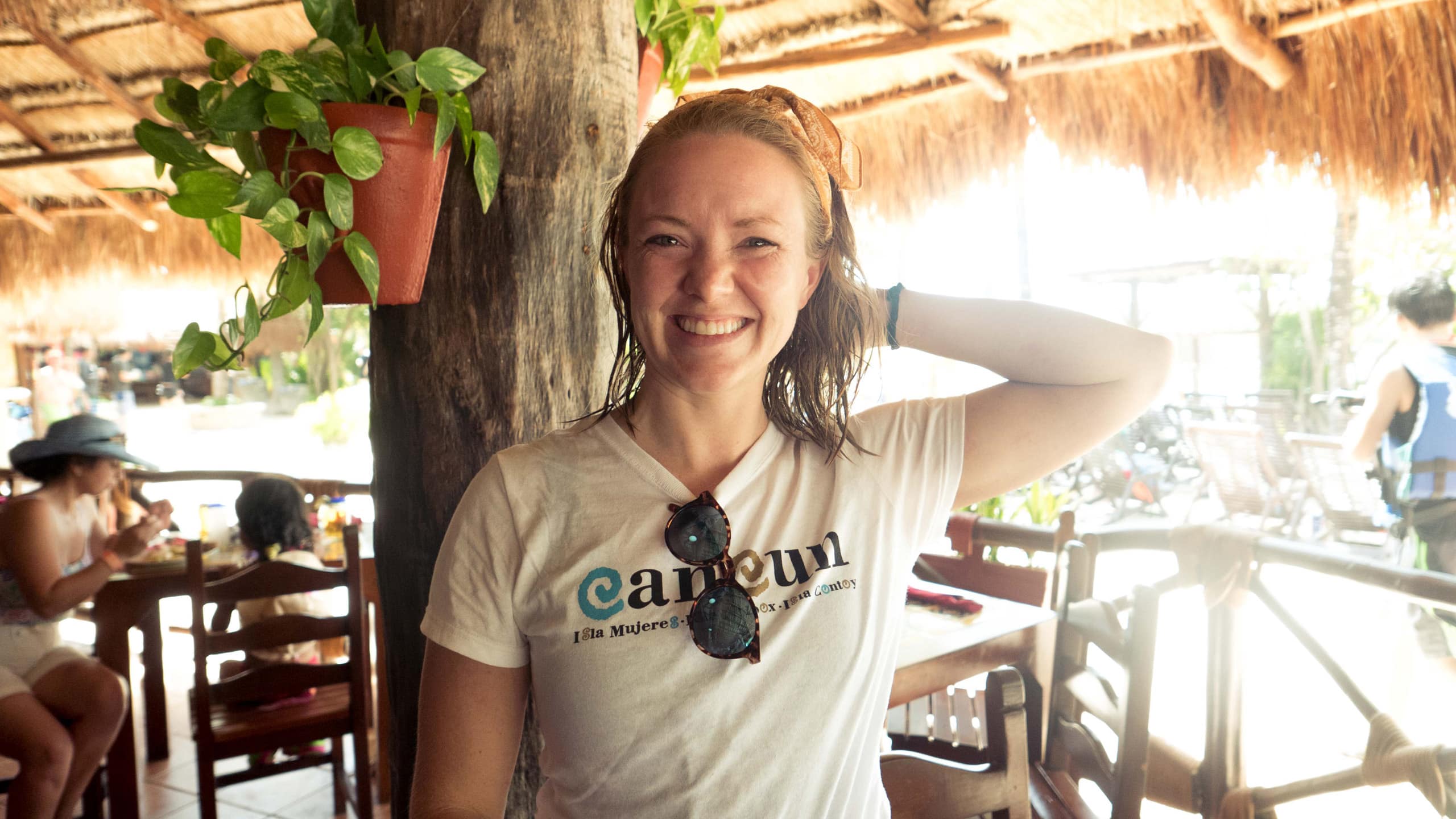 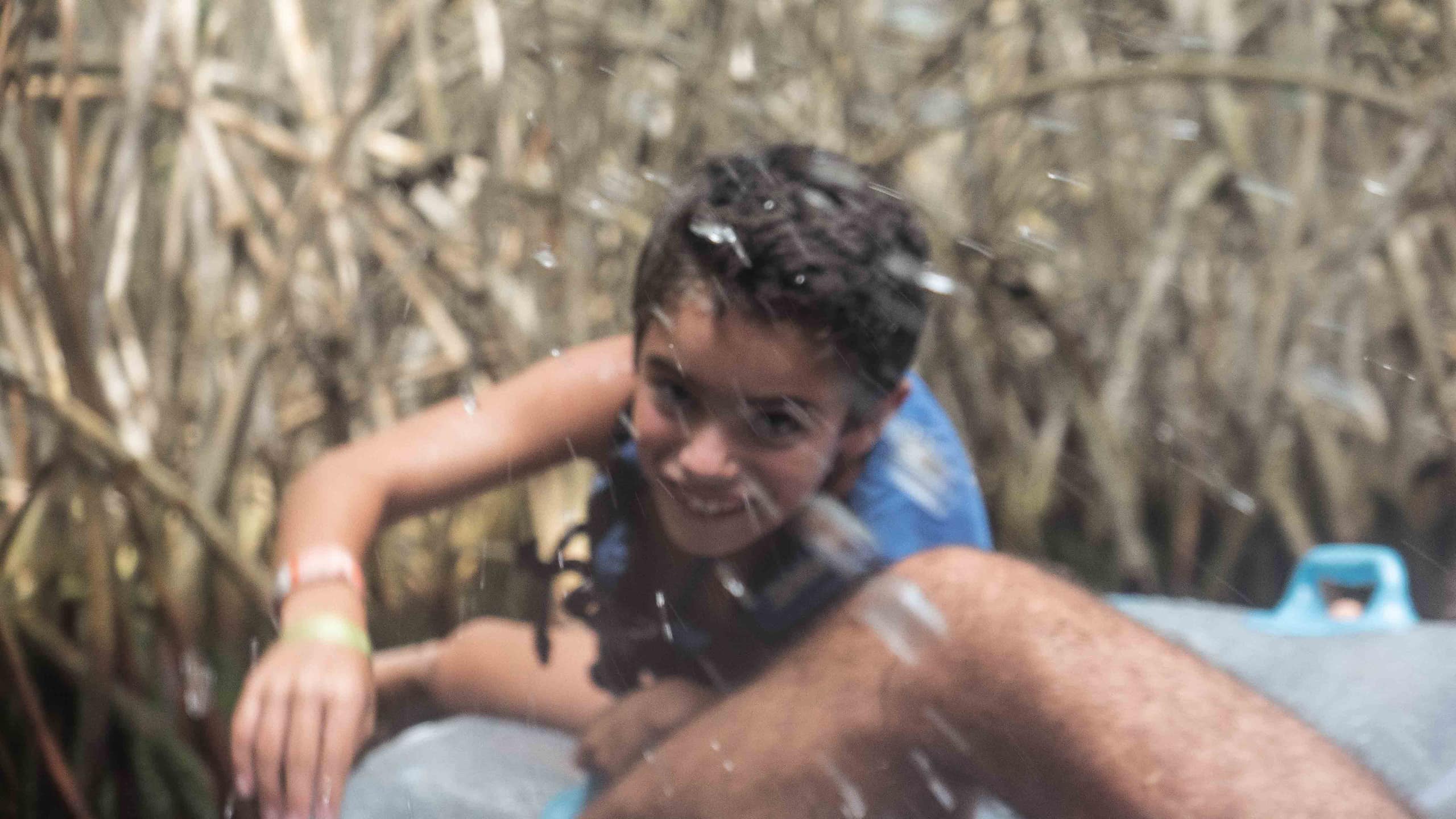 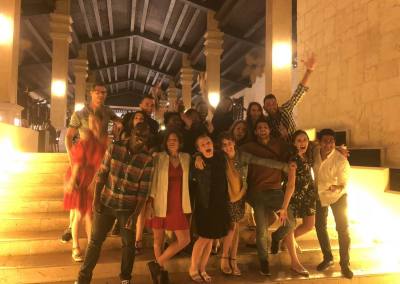 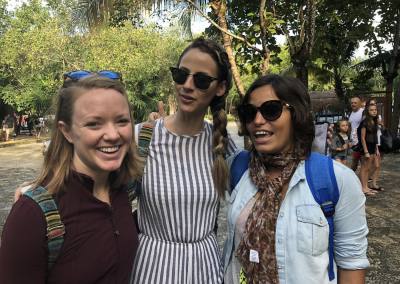 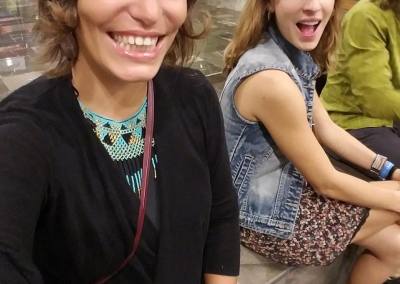 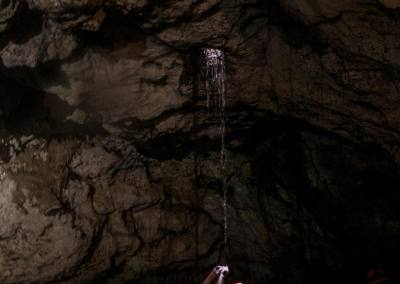 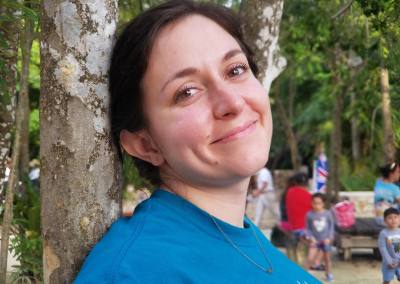 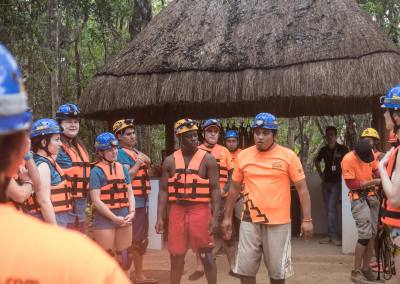 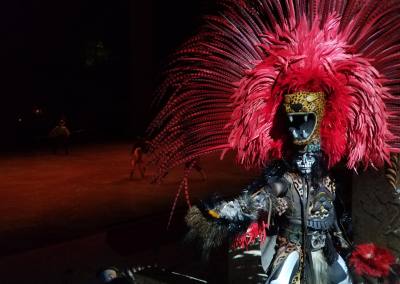 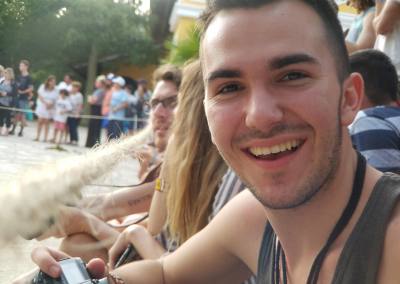 Me and Ivan dancing  samba at the wonderful night club Coco Bongo.

End of the game

However, as the crazy week was coming to an end, I felt mostly satisfied; like I had made the most of it but was probably not getting the job. That wasn’t that bad after all because I could go on and pursue my plan to travel to Asia for the first time in my life. The night before the final announcement many of us celebrated, got a bit drunk and met on the beach to watch sunrise together. Before going to bed briefly, I told my brand new friend Ivan I thought he was probably going to be the one. His name ended up being the one Lizzie Cole (Cancun’s tourism board head) pronounced the following morning before all us other participants congratulated and hugged him. I was genuinely happy for him and thought he was going to be outstanding at his position. We still shared some days in Playa with him and Meritxell (the Spanish applicant). Months later, I’d catch up with Rafael and Jen in Indonesia and Meri again in Spain, but those are stories I have still to write…